What is a stroke?

Stroke is a disease that no one wants because in an instant it changes the healthy person into a disabled person who in daily activities depends on external help. Therefore, stroke does not only affect the patient, but it is also a great burden for relatives, health care and, because of its frequency and great economic burden, it affects the entire society as a whole. It is the most common cause of disability in the developed world. The mortality due to stroke is high: over 20%.

The experts call brain stroke a brain disease, which is a consequence of a disturbance in the blood circulation of the brain, either due to the occlusion of one of the cerebral arteries due to a clot, or due to bleeding. Brain cells do not receive oxygen and food: in few minutes, in absolute lack of oxygen and food, they die; or they are damaged if they receive too little oxygen and food.

HOW DOES A CEREBRAL STROKE HAPPEN?

The cause of the stroke is (1) the occlusion of the cerebral artery, and we speak of ischemic stroke, or (2) bleeding in a part of the brain, and in this case we speak of a hemorrhagic stroke. 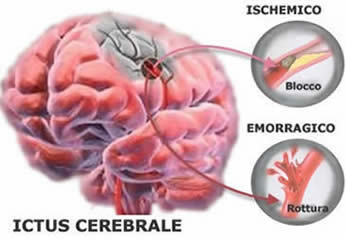 The cerebral vessel may be blocked due to atherosclerosis of the altered cerebral artery. In the altered atherosclerotic artery, which becomes rough, thrombocyte platelets attack, thus creating a clot (thrombus) that obstructs the blood vessel. This clot occurs more commonly in the cleavage of the large arteries (carotid artery) on the neck, from which it detaches and travels towards the narrower arteries in the brain, where it gets stuck and thus blocks the cerebral artery. In this case we speak of arterial thromboembolism. If there is a heart rhythm disorder, eg. atrial fibrillation, or in the case of artificial heart valves, a clot forms in the heart which then "flies away" (as we say in jargon) in the brain, and we speak of cardio(thrombus)embolism.

About a quarter or a fifth of strokes occurs in the brain (intracerebral hemorrhage) due to a broken or torn vessel.

WHAT ARE THE SIGNS OF THE STROKE?

The first characteristic of the stroke is that it is a sudden formation, an instant thing. It usually strikes like a bolt from the blue. It occurs more often during the night: the patient wakes up paralyzed on one side of the body and often cannot speak. The signs of stroke depend on the particular affected area of the brain.

If those parts of the brain which control the movement are affected, ie the motor regions of the brain, the patient will have muscle weakness or paralysis , which is called paresis (if there is a reduction in movement) or plegia (if it is a complete paralysis).

If the affected part of the brain is that one where the senses of the body are harvested and analyzed, the patient will not feel the touch on the side of the affected body (anesthesia, analgesia). In the milder forms of disability, these senses will be reduced (hypoesthesia, hypallosis) or altered (dizestesi). Very often, the patient will notice feelings of change such as tingling (paresthesia).

If the center of the speech is affected, the patient will not be able to speak. Speech disorders are called aphasia or, if it is a milder form, dysphasia. If the cerebellum or brain stem is struck, the patient will not have control of movement at the extremities of the limbs, but will perform individual movements in an uncontrollable, cumbersome, clumsy way (ataxia). If the brain stem is hit you there can also are speech disorders (dizarty), when the patient knows what he means, but his tongue and his lips will not obey him. Brain stem disability is also a cause of swallowing disorders (dysphagia). The patient risks that every sip goes sideways, because the liquid penetrates into the respiratory tract. We should not give the patient to drink or eat.

ARE THERE ANY SIGNALS FOR WORNING THE STROKE?

Unfortunately, in the vast majority of cerebral strokes, the event occurs like a bolt from the blue. Transient brain disorders (transient ischemic attack) have already occurred in about 5-10% of patients. These disorders are the same as those of stroke, but by definition they disappear in less than 24 hours. Most often they last only a few minutes.

HOW DO WE HAVE TO ACT WHEN AN ICTUS HAPPENS?

It is important to recognize the signs of a stroke, since an early treatment in the hospital can dissolve a clot that causes arterial blockage. Due to the high sensitivity of brain cells, such treatment is only possible within the first four and a half hours after the onset of stroke.

If the situations described above occur, contact immediately a doctor!

Stay calm!
Call 112 and tell to whom, what and when it happened.
Follow the instructions given by the medical staff.
Give the exact address!

WHAT DOES THE EVENT OF A STROKE INFLUENCE?

Statistically, some factors are more frequently associated with the appearance of a stroke and are called risk factors.

Stroke, like other diseases related to atherosclerosis, is associated with heredity, age, sex and race, and these risk factors cannot be influenced.

However, it is important to know that stroke occurs most commonly in people with high blood pressure, in smokers, in physically inactive people, overweight people, with diabetes, with high levels of fat in the blood, which exceed alcohol consumption, with heart rhythm disorders - atrial fibrillation, excessive blood clotting, etc.

HOW TO CARE THE STROKE?

Due to the high sensitivity of brain cells, rapid identification of stroke and confirmation of diagnosis with computed tomography (CT) is important. Immediately, however, within 4 and a half hours after the onset of the stroke, an attempt is made to dissolve the clot that has closed the blood vessel (fibrinolytic treatment) or, in recent years, to remove it mechanically (thrombolysis). This second option is not without risk of worsening the condition and, therefore, such treatment is decided only after a rigorous selection of the patients.

In all patients, after a stroke, symptomatic treatment, prevention of complications, and especially early rehabilitation begin immediately.

HOW TO REHABILITATE THE PATIENT?

Rehabilitation must begin immediately. The patient must stay in bed in the correct positions that prevent tension and muscle spasms. Active exercises should follow passive stretching as soon as possible: sitting, standing, and walking. At the same time, speech disorder, swallowing problems must also be treated. Therefore, rehabilitation is a team effort in which, in addition to the doctor and nurses, physiotherapists, therapists, speech therapists, psychologists, social workers, etc. are also involved.

At the moment, in Slovenia there are not enough rehabilitation centers while, in Italy, there are few centers, particularly in the north. But, in any case, the most part of the work can be done by loving and intelligent relatives, who rehabilitate the patient at home under the guidance and rehabilitation advice of an expert.

Furthermore, post-stroke patient associations play a very important role in social rehabilitation, in patients with poor quality of life. Many times, the patient after the stroke understands that he can live satisfactorily, despite the stroke, and not be overcome by despair, only when he meets other patients.

CAN WE REDUCE THE RISKS OF THE STROKE?

Yes, we undoubtedly reduce the risk of stroke if we treat the diseases listed above and abandon unhealthy habits. With a healthy lifestyle and care for risk factors (primary prevention), we can significantly reduce the chance of a first stroke. But, even if we have already had a stroke, prevention (secondary prevention) is extremely important to reduce the probability of stroke recurrence. In addition to a healthy lifestyle and the treatment of risk factors, it is important to regularly take drugs that reduce the excessive adhesion of blood platelets (anti-infective protection) or reduce the formation of clots (anticoagulant protection).

Social rehabilitation after a stroke is also extremely important, as it is believed to significantly reduce the risk of stroke.

Stroke is an extremely difficult disease, but many patients have suffered from it, with their lifestyle, constantly showing us that integration into society is really possible, even despite any disabilities.

[1] King’s College London for the Stroke Alliance for Europe (SAFE). THE BURDER OF STROKE IN EUROPE: the Challenge for Policy Markers. 2017

[2] King’s College London for the Stroke Alliance for Europe (SAFE). THE BURDER OF STROKE IN EUROPE: Appendix. 2017

(Translation, preparation and integration of materials: University of Nova Gorica)